Has anyone had the experience of someone buying your art on DPW to resell? I’m asking because some paintings (mine included) often cost less than it would to frame them. I also wonder if anyone has seen their original work copied and sold as prints on the Internet?

Not yet Rafael…I will keep an eye on things. Have you or someone you know have personal experience of this?

When I started here I initially priced my opening bids very low and one buyer won 12 pieces. I started getting paranoid about gallery owners reselling them. I don’t know how any artist could ever “keep an eye on things” in such a vast arena as the internet. Honestly, I think it would be foolish to resell online because you could be easily caught since the name would have to be associated with the painting. However, there is no way you could detect a resale in a gallery or physical store, nor is there anything illegal about reselling it.

Maybe I used a poor choice of words Raphael…perhaps I should say…‘now I am aware after your post’. I must admit I hadn’t thought about it too much before now but I suppose it could happen to me.

Unless you are famous enough to have a lawyer skilled in intellectual property rights, once a painting is sold the buyer can do whatever they want except copy it for sales reproduction. I’m tempted to put a clause in each piece about 1st reproduction rights but I’m afraid of being seen as uptight and paranoid.

Does anyone else include any legal clause about reproduction rights with the paintings you sell?

I understand the concern regarding reproductions, but as for re-selling originals, that’s just what collectors do, isn’t it, especially as an artist’s work moves up in value? As you said, there’s nothing illegal (or unethical) about that.

Back to illegally reproducing the image, though, I understand what you’re saying – over on Deviantart I’ve seen sheer paranoia about it, and from what people say, it has happened. But I have enough regular stuff to worry about without adding that to the list.

I include a Certificate of Authentication which has a statement on it, although I did not do it for that reason. I just thought it was a nice touch. 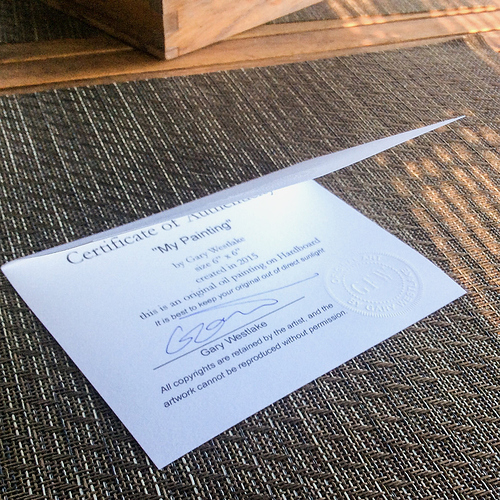 I like that seal you have, Gary. Where did you get it made?

The California Resale Royalty Act (Civil Code section 986) entitles artists to a royalty payment upon the resale of their works of art under certain circumstances. Act does not apply if:

It is just an embosser (the kind that notaries use). I think I had it made for me at Staples online. I think it was less than $50. You design it yourself on the site.

I’m definitely going to do this. Thanks for posting!

I always include one of these with my paintings Gary. With a small thumbnail image of the picture on it too.

Even a CoA can be copied, but I use it too because it acknowledges that what your customer bought is something unique and special.

I’d say add an orginial nr on both the back of the painting and on the CoA and don’t supply the same CoA twice for the same painting (long live MS Excel!). When someone sells one of your paintings and doesn’t include the CoA you had provided, the new owner has a problem.

A thumbnail image is actually a good idea Anne, thanks

The Next Great Copyright Act
"The Next Great Copyright Act" would replace all existing copyright law.
It would void our Constitutional right to the exclusive control of our work.
It would “privilege” the public’s right to use our work.
It would “pressure” you to register your life’s work with commercial registries.
It would “orphan” unregistered work.
It would make orphaned work available for commercial infringement by “good faith” infringer’s.
It would allow others to alter your work and copyright those “derivative works” in their own names.
It would affect all visual art: drawings, paintings, sketches, photos, etc.; past, present and future; published and unpublished; domestic and foreign.

It looks like California is the only state in the union with a law like that and, from what I’ve been reading, part of it was struck down as being unconstitutional, since it’s an impediment to interstate commerce. And speaking of the effect a national law like that would have on the art market, I saw this:

Seventy countries─including the UK, Australia, and Mexico─currently provide visual artists with a cut of the resale price of their work, but the US has long resisted legislating, arguing that such measures would be detrimental to the art trade.

Detractors may have a point. According to a study commissioned by the British Art Market Federation (BAMF), the resale rights─which apply up to 70 years after the artist’s death in the European Economic Area─are among the factors eroding the UK art market (see Artist Resale Rights Depressing UK Market, Study Says).

Arts Economics’ Clare McAndrew, who led the study, noted that the booming postwar and contemporary sector has shifted to the US, and particularly, to New York. “If you look at the US, sales have gone way beyond boom era levels,” she said. “Since 2010 they haven’t grown in the UK at all, they’ve dropped."

I happened upon it on here.

The late Robert Genn used to say that artists should get a portion of the resale of an original, but I do not know how that could be enforced.

When I make a sale, I include a COA that has an image of the artwork, other basic info, and has a copyright statement on it with all rights reserved. IOW purchase of the artwork does not constitute repro rights to the image.

And that’s the best we can do, I think.

Yes, I do. On every DPW painting I offer, it says “reproduction rights are not included with sale of artwork.” I’ve never had a problem with that. I think it’s good to let people know.

I stumbled on this the other day!

I think it is great that the US Copyright Office has specifically asked for input from visual artists. I am really surprised that almost no one is talking about that! It seems like a great opportunity to be heard.

I watched the video about the Next Great Copyright Act - one leading copyright lawyer believes that if the proposed changes are made almost no lawyers will be willing to help artists defend their copyrights. Why? Proving that the offending party did not believe it to truly be an “orphaned work” will be too hard and unreliable. Ok, so if the new law could make it impossible to defend our copyright, what will having them count for?

I still plan on making it clear that I retain sole copyright of my work when selling paintings… but I’m still worried about possible changes to the law.

Please consider writing the US Copyright Office. You have 2 more days!

The way I heard about this new copyright act was on a blog from renown illustrator Brad Holland. It alarmed me because I trust the judgement of great artists. Now I don’t know what to believe. That’s why I retreat to the studio. The real world is too confusing.

I had a painting sell this weekend and when I received payment, it was from a place that had the word “Aquisitions” in the name. This is a first for me so it set off some alarm bells. I looked up the name of the company and it seems the buyer has a gift shop in Maine and sells some items online. I have no idea if she bought my painting for personal viewing or if she plans on reselling in her shop. I’m not sure yet how I feel about it.

It had a very low starting price on auction. It was part of the 30/30 challenge and I intended all of those paintings to start low. Now, I’m second guessing that decision and based on that, I’ll be upping my starting point from here on out to at lease get more of what I think the painting is worth. Thank you all for the discussion on this so far.

I’m still not quite sure why it is bothering me, though.