What is your experience of being commissioned to paint from a photo?

Have you ever been commissioned to paint a picture from a favourite photo. If so would you decline the commission If the image isn’t very good.

I thought I would experience working on a commission to see how feasible it would be. So I asked a good friend to select a favourite holiday photograph that really meant something to him, he presented me with an image of mountains he took visiting the Scottish highlands - it was an interesting experience painting the commission. Well first of all I have not had a lot of experience painting landscape, but I took on the work. So here’s the dilemma - the photo meant something to him, but from my point of view it didn’t work: it had no real focal point and the foreground was void of anything visually interesting - this was my initial thoughts anyway.

I attempted this painting 5 times and gave up 5 times, burdened by my inexperience of landscape painting. And I had thoughts running through my head that this photo just doesn’t lend itself to becoming a viable painting. So at some point I started to think ok I need to change what I’m looking at, use some artistic license to better the composition. But then I thought, wait a minute, this image means something to my friend. So how can I possibly change it.

To cut a long story short, after participating in the recent ‘Copy Challenge’, I thought I would have a last attempt at the Scottish mountain scene (well it probably wouldn’t have been - I don’t like to be beaten). I had a larger canvas, nicer paint, and some new ideas under my belt so I felt reasonably confident. I got started, but then after a couple of hours that familiar feeling started to come down on top of me: this is going the same way as my 5 other attempts. This is the point that always trips me up: the ugly stage (or the stage immediately after it). The 'ugly stage’ was a new term to me, and of course all artist go through it…it’s inevitable, just part of painting a picture. But just the sight of it was enough to take the wind out of my sails. I got some encouragement from my partner, what I thought was ugly she thought was good (with just one adjustment). So I carried on and finished it. The painting was better than all my other attempts but I still didn’t get that feeling when I’m really happy with my work.

So to finish up I have to say that I did end up changing things in the photo, but not drastically. I just exaggerated some of the colours put some colour where there wasn’t any, and invented one or two objects in the foreground…that was it. Well that’s the job of an artist I can hear a lot of you saying, and yes your right…I get it now. But I got hung up on presenting my friend with a faithful reproduction of his photograph (I should have mentioned I try to paint loosely, not photo realistically). I showed my friend a photo of my painting over a cup of coffee today. And I have to say that all the attempts at this painting was worth it just to watch his face. He was delighted with it, and I leant a ton: push through the ugly stage at all cost and don’t be afraid to enhance what you see in the photo. After all, although nature is wonderful, it has a habit of leaving the artist to do a bit of work…but maybe it should be like that anyway.

Care to share your experiences of painting a commission?

Not heard of the 'ugly stage’ ? Have a look here:

Working Through The Ugly Stage - Why And How To Do It

The ugly stage is the early point in the process of creating a work when you think it's dreadful. Now is when you need to push through rather than quitting!

I have painted commissions from photos. I usually discuss the pros and cons with the client. Helping them to see that they already have a photo, and what they should think about is a more artistic rendering. What to include what to leave out and why. Colors and values that they like about the photo, etc. Then I paint from these parameters. Most clients understand the discussion are usually pleased with the outcome.

Well I delivered, in person, the commissioned painting and I’m happy to say that my friend was very happy with it.

I have to say that this was an easy commission, not so much with the process of painting, but with the conditions I was working under. This was a free painting and painted for a supportive friend (it’s great when you have one of those friends - especially when they are honest about my work). As mentioned in another post, here is an image of the finished painting - (sorry no work in progress).

One of my concerns, and maybe the whole reason I did the commission in the first place, was to see if the finish painting matched the expectations produced from seeing an image of the painting on a mobile device. I think paintings can look better on an electronic device simply because pure light is reaching the eye, not reflected, which needs its own light source. It met my friend’s expectations, which I was glad to hear.

Would I do a commission for real I’m not sure at the moment. I think I need a consistent style which I hope will come in time. I’m making a shift from tight painting to loose (partially Carol Marine’s fault), and from oil to acrylic, so my style is in flux at the moment. 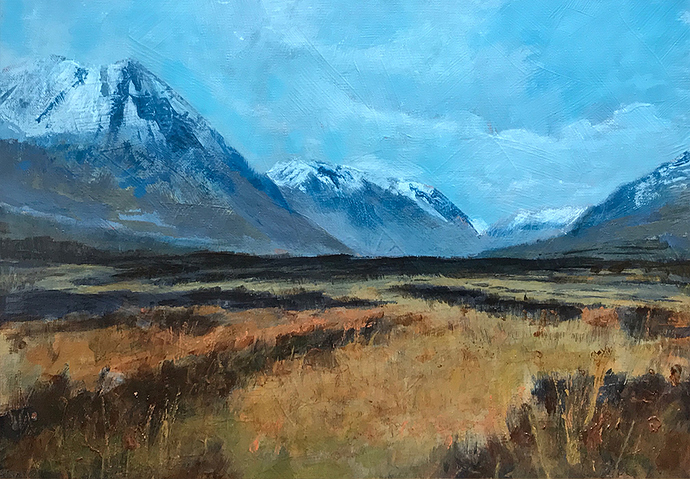 It’s a beautiful painting Ken. I’m sure your friend must be very pleased.

I walked The West Highland Way several years ago. This is Scotland! Lovely work.

So another commission done. Luckily, they were ok with my enlarging a small portion of their wedding flowers (bridal bouquet), because they didn’t have good pics at all. I had to use another photo of each flower and sized according to their pics and anyway, came out good. Was not the full bouquet but I think much better. Aren’t they paying me for my creativity anyway?

I have had a lot of commissions lately and I don’t take commissions. Haha. True.

Another one, a cat painting from 2 poor pics but I managed in the end to make up my own lighting and colors should be close. Happy with that one.

Next, a dog in a field next to stream. She wants 16x20 but I haven’t yet painted anything that size except a bird or two. In this case, I am cropping very tightly and shrinking background, otherwise photoshopping it up to make a pleasing comp for a 10x20. I love this one. I am also submitting to her the 16x20 idea. I do hope she goes for the 10x20. Would like to do that one. And, you guessed it, poor photo. Thankfully, I can get a few more pics from FB of her dog so I can get that right but the background is boring and full of weeds. Haha, I will make magic happen though. It is more about the challenge of coming out with something they like and I am pleased with and I am very hard to please. But like I said, I am going to pass that by her before I start.

I’ve now done several commissions. I always change them some - I might improve the composition, or change up the background, or add a focal point. I just started another one - a simple sunset scene. I will do minor changes to help lead the eye through the painting and add a focal point in the sky - probably a bird or two. I thought I would hate doing commissions but it turns out money talks. And I still reserve the right to say no - I haven’t done enough people portraits to feel comfortable with those for instance. And I work in acrylics. This means if I screw it up, I can just repaint it until I’m happy with it. And, I’ve learned the hard way to get a deposit.

Did you get the commissions thru your art show, FB or friend? Mine are a mix of FB, Insta, friend of friend, and ebay.

family and friends but mostly coworkers. I work in a hospital so have lots of coworkers and the word spreads that I paint. I haven’t tried ebay or instagram yet but they are on my list. Do you get many sales from ebay? I’ve had inquiries from facebook but no followthrough from people

I sold soooo many abstracts on ebay but of course they tinker with ebay twice a year and I sell very little due to being buried on the site by their last changes.

I heard a lot of people sell thru instagram but I don’t post enough. At least I think that’s why. Heehee.

A number of years ago, I painted quite a few pet portraits (mostly dogs) on commission. All of the paintings were done on commission, with photos ranging from good to awful. Having a nice photo certainly makes the task easier, but I painted a couple of portraits that came out surprisingly well using lousy photos. I managed this by using a bit of creative license, and the customers were pleased with the outcome. In one case, I was provided several photos of two dogs they wanted painted. I was able to find profile shots of both dogs from similar vantage points, and I painted both dogs together as if they were standing side by side. For the background, I just painted it a neutral color that complemented the colors of the dogs. I adjusted the shadows as if the light was coming from the same direction.

You make it sound easy, and perhaps it is for you. I find it more challenging and find I do best when I do setups in Photoshop first. Getting the light right isn’t as easy for me either.

Ken, thank you for the link about the ugly stage. That is so true, and I have found pushing through this stage leads to new discoveries.
So far, I have only done 1 commission. A friend asked me to paint buttercups as a gift to his mom since she loves these little flowers. He gave me complete free reign on how it should be. I struggled for a while how to paint these tiny flowers. I ended up painting a few large buttercups in the foreground with a field and hills in the background. She loved it so much, and I was moved that I could evoke such a response.
I would do commissions again for someone who knows my style, and with the understanding I would take artistic liberties.